Phil Jackson has coached some of the best basketball players and teams that our world has ever known. He's mentored and invested in players like Michael Jordan and Shaquille O'Neal, and lead his teams to winning the NBA championship eleven times.

While I've made it known that I'm not really a sports fan, I am a fan of learning about leadership from some of the greatest leaders of our time.

In his autobiography of sorts, Eleven Rings, Phil Jackson shares his basic principles of, what he calls, “mindful leadership.”

I wanted to share those principles with you, and have a discussion at the end! 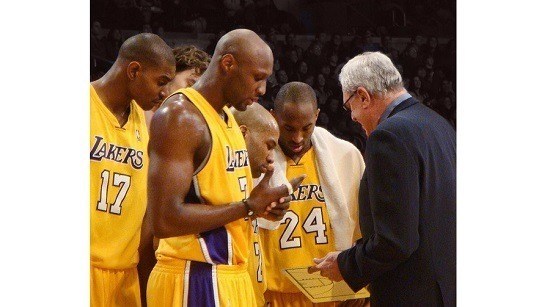 With leadership, as with most things in life, the best approach is the simplest – Phil Jackson

1: Lead from the Inside Out

Don't look at the competition and try to keep up with or compete with them. Do your own thing in your own way and become great at it.

If you have a strong personality, you may have to dial it back. Jackson warns,

[An] outside-in strategy might work in the short term… but it inevitably backfires when the players grow weary of being browbeaten and tune out or, even more likely, your opponents wise up and figure out a clever way to counter your last move.

I definitely think this works for business too.

Leave your ego at the door. Once you decide to be on a team, it's not about you anymore; it's about the team.

3: Let Each Player Discover His Own Destiny

One thing I've learned as a coach is that you can't force your will on people. If you want them to act differently, you need to inspire them to change themselves.

A man led by fear will not be led for long.

4: The Road to Freedom is a Beautiful System

Jackson coached the “triangle system.” His system empowers the players to think on their feet. He encourages them to think for themselves, adapt to the moment, and not rely on his coaching to pull themselves out of a rut.

While this method requires everyone on the team to be alert and engaged, both of which take more work, the results are overwhelmingly positive.

5: Turn the Mundane into the Sacred

To me, this principles is about focusing on the goal, not the tasks that get you there.

The essence of coaching is to get the players to wholeheartedly agree to being coached, then offer them a sense of their destiny as a team.

What the players really needed was a way to quiet the chatter in their minds and focus on the business of winning basketball games.

Jackson is a fan of meditation. Not really considered “cool” by the rest of the NBA, his method of having his players sit in a dark room and be still worked wonders right before a big game. He wanted his players to gel and become connected as a team.

He gave them freedom to work within some pretty wide boundaries, too. Regarding rules and restrictions he says,

If you place too many restrictions on players, they'll spend an inordinate amount of time trying to buck the system. Like all of us, they need a certain degree of structure in their lives, but they also require enough latitude to express themselves creatively.

This absolutely applies to the work environment.

7: The Key to Success is Compassion

We need to have compassion for others as well as for ourselves.

I've found that a few kind, thoughtful words can have a strong transformative effect on relationships, even with the toughest men on the team.

We all want to be appreciated, cared for, respected, and made to feel like we matter.

8: Keep Your Eye on the Spirit, Not on the Scoreboard

Together, we're stronger than any of us on our own. This applies to life, business, relationships, and basketball.

Most coaches get tied up in knots worrying about tactics, but I preferred to focus y attention on whether the players were moving together in a spirited way.

9: Sometimes You Have to Pull Out the Big Stick

Ever heard of tough love? This is kinda like that.

Coaching isn't all fun and games. Sometimes no matter how nice a guy you are, you're going to have to be an asshole. You can't be a coach if you need to be liked.

Agree or disagree with that one?

My wife and I talk about this all the time. Sometimes we both want to charge in and fix something where we see a problem. Over the past several months, she's had to stop me from “fixing” things and I've had to tell her to “slow down and see what happens.”

This also applies to problem solving and finding solutions to challenges you're facing.

I believe that focusing on something other than the business at hand can be the most effective way to solve complex problems. When the mind is allowed to relax, inspiration often follows.

He goes on to quote a scientific study which states that

The unconscious mind is a terrific solver of complex problems when the conscious mind is busy elsewhere, or perhaps better yet, not overtaxed at all… People may do their best thinking when they're not concentrating on work at all.

Sometimes I sits and thinks, and sometimes I just sits – Satchel Paige

Obsessing about winning is a loser's game: The most we can hope for is to create the best possible conditions for success, then let go of the outcome.

I think this really ties in with principle #1. Focus on doing your best, prepare and practice, show up, and then let go of the things you can't control.

Focus on the journey rather than the goal. What matters most is playing the game the right way and having the courage to grow, as a human being as well as basketball players. When you do that, the ring takes care of itself.

If you're interested in checking out Phil Jackson's book, Eleven Rings, here is my affiliate link to Amazon. Clicking it earns me a small commission but costs you nothing!

Question: Do you agree with each of these? Would you add or take away from this list? Share your thoughts with me in the comments below!

How to Break Through the Plateau and Have Success in 2018

Are you an entrepreneur? Do you want to start or grow your business? Enter your name and email below and I'll send you the tools I use, plus other resources to help you succeed.

I create content and help entrepreneurs launch and grow their businesses. I am a best-selling author; my latest book is Exit Strategy. You can get business tips, tools, and resources for free by joining my community.

Everybody Makes Mistakes. Here’s What You Can Do About It

Please log in again. The login page will open in a new tab. After logging in you can close it and return to this page.